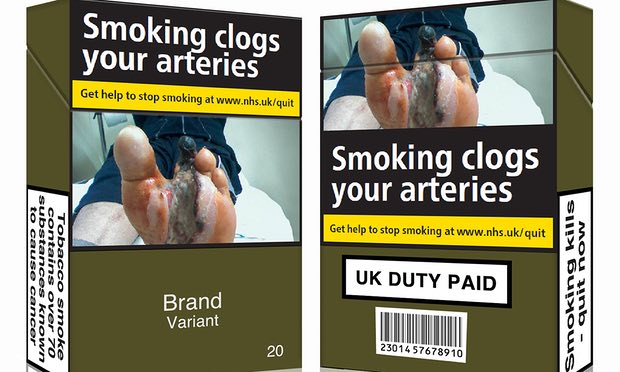 Under the EU directive, all tobacco packaging will be uniformly green with large images showing the harmful effects of smoking. Photograph: ASH/PA

From the Press Association

Cigarettes must be sold in standardised green packaging bearing graphic warnings of the dangers of smoking from this weekend, as rules designed to prevent young people taking up the habit come into full effect in the UK.

All packs must contain at least 20 cigarettes to make sure they are big enough for health warnings to cover 65% of the front and back, with the brand name restricted to a standard size, font and colour.

The EU tobacco products directive has allowed the UK to go further with its regulations to require all tobacco packaging to be uniformly green with large images showing the harmful effects of smoking.

Packaging of hand-rolled tobacco must also be in the same colour and pouches must contain a minimum of 30g of tobacco.

The directive extends to e-cigarettes, restricting tank sizes to no more than 2ml and the nicotine strength of liquids to no more than 20mg/ml, and there must be a 30% health warning on the front and back reading: “This product contains nicotine which is a highly addictive substance.”

The new rules also include a ban on menthol cigarettes from 2020 and promotional statements such as “this product is free of additives” or “is less harmful than other brands”.

Standardised packaging regulations, which is a UK initiative, come into full effect on Sunday, while the rules governing minimum pack sizes and e-cigarettes will be in force from Saturday May 20th 2017.

Companies have had 12 months to sell old stock and fully implement the changes under the directive, which was adopted in 2014 but held up by a series of court cases testing its legality.

The tobacco industry challenged the tobacco products directive through the European court of justice (ECJ) and standardised packaging regulations through the UK courts.

Last May, the ECJ ruled that the directive was lawful, and days later the industry’s legal challenge to standardised packaging was defeated in the UK courts.

The new rules are an attempt to cut the number of smokers across the EU by 2.4 million. An estimated 700,000 premature deaths are caused each year by smoking, and cancer charities are backing the measures.

The UK was only the second country in the world to pass legislation on standardised packaging after Australia in 2012, with many others following on, including France, Ireland, Hungary and Norway.

The chief executive of the Action on Smoking and Health (Ash) charity, Deborah Arnott, said: “Getting rid of glitzy, heavily branded tobacco packs is the latest in a long line of achievements by the UK, which is a global leader in tobacco control. We now have among the fastest declining smoking rates in the world thanks to decades of sound policy, but smoking rates among the poorest and most disadvantaged remain high.

“If this is to change, then a priority for the next government must be to publish a new tobacco control plan with tough new targets, focused on tackling health inequalities.”