Social media channels are increasingly important for advocacy, with billions of people active on social media around the world. They have also proven to be an effective way for patient organisations to communicate with patients during the COVID-19 pandemic.

In 2019, the Global Lung Cancer Coalition (GLCC) commissioned a ‘social listening’ project to look at what people are talking about online in relation to lung cancer. The research was run across 11 countries spanning six continents and looked at which channels, formats and types of content people find most engaging. The project comprised of two phases, a listening exercise and an analysis of social media channels.

This document summarises the project’s findings and makes recommendations to help advocates design impactful campaigns and improve engagement on the most powerful and widely used social media channels: Facebook, Twitter and Instagram. 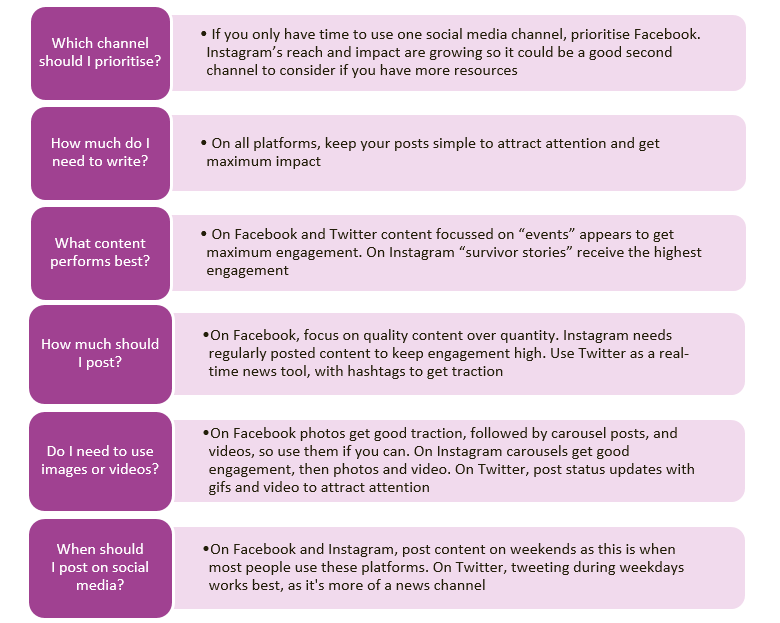 The GLCC has produced a guide for advocates on social media engagement. For more information, please contact the secretariat on glcc@roycastle.org.

Researchers analysed public posts from Twitter, Instagram and blog fora (but not Facebook) to determine the subject of lung cancer discussions. Three trending topics were identified for each country. These varied between countries, but there were four recurrent themes: survivor stories, smoking, pollution, and medical innovation:

Key findings from the analysis of social media channels

The analysis of social media channels looked at posts from 35 GLCC members, and examined where and what type of content was posted and how engaging it was for social media users. The analysis found:

In the listening exercise researchers examined data from Twitter, Instagram and blog fora in eight GLCC member countries – Australia, Brazil, Canada, Israel, Russia, South Africa, UK, US – plus China, India and Poland. The content of public posts was analysed, along with what was trending on social channels and how often lung cancer topics were mentioned online. Facebook data was not included due to privacy constraints. Data was collected between November 2018 and May 2019 using Brandwatch, a social media monitoring tool. Over 350,000 pieces of content were gathered from more than 200,000 unique users.

Social media analysis was undertaken using Antelope, a social media analytical tool, to examine posts from 65 organisations (including 35 GLCC members) between 1 June 2017 to 31 May 2019. Researchers looked at content and tactics being used by advocacy groups on 124 social media accounts across Facebook, Twitter, YouTube, Instagram and Pinterest. The analysis included more than 54,000 public posts engaging 2.3 million users (measured in likes, comments and shares).

Country level briefings, which can downloaded in pdf format:

For more information, please contact the secretariat on glcc@roycastle.org.