Winners of the Lung Cancer Journalism Awards for 2011

The award ceremony took place during Lung Cancer Awareness Month, in Borgo San Dalmazzo at the headquarters of the association.

To have put under the attention of millions of Italian citizens, in a direct and effective way, the impact of lung cancer on the life of a busy and successful journalist: HIMSELF. Matteo’s tale is the story of his own reactions once the diagnosis of inoperable lung cancer was made, his first search for the best treatments, and his beginnings with chemo-radiation therapy. Still Matteo Mastromauro is alive and apparently in good health, and continues to report on important Italian political and business affairs from the top national TV news (Channel 5 News).

To see Mastromauro’s report on his disease, please click on www.youtube.com

Frederike Krommendijk, journalist with a local newspaper received a Global Lung Cancer Coalition award for excellence in journalism 2011 for her book “They’re so smart today”

She wrote this “survival guide” for people who have been diagnosed with (lung) cancer and their loved ones. Her husband Peter was diagnosed with lung cancer in 2005. He had only a four percent chance to recover, but he recovered. After that frightful period Frederike decided to keep all information they had acquired through trial and error and produced a practical book. How do you know if your doctor is an expert, how do you get reliable information, how do you deal with your environment and how do you ensure that you keep good relationships, these issues are all addressed in the book. Many common symptoms such as fatigue, nausea and depression after the treatment is over are discussed.

The award was first launched in May 2006 to recognise excellence in lung cancer reporting.

Lung cancer is the leading cause of cancer-related death in both men and women, with more than 1.2million new cases worldwide every year.

Sufferers of lung cancer are often stigmatised for their disease because of the association with smoking.

In our experience, the majority of media support this stigma by insisting on only interviewing “non smokers” with the disease. That is why the series of articles Cassandra has written in the Daily Telegraph about her personal experience of lung cancer are so vitally important, not only to break down this stigma, but also to raise awareness.

The Lung Cancer Journalism Awards present a unique opportunity for journalists to demonstrate their commitment to and knowledge of lung cancer through accurate and thought-provoking reporting.

The award was presented in New York by Win Boerckel of CancerCare, and Carolyn Aldige of Prevent Cancer Foundation, shown here with Katie Couric (center).

The award was presented at the Lung Cancer Alliance’s Shine a Light on Lung Cancer National Vigil in Boston, MA by advocate Rich Monopoly. 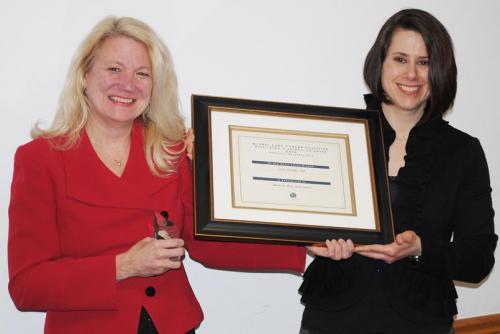 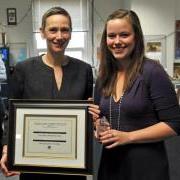 (The picture above features Maureen Rigney, Director of Community and Support Services at Lung Cancer Alliance presenting the award to Casey Blake in the Citizen-Times office.)

The New Media winner was Robert Densen, for his blog The Last Refrigerator, published on the Huffington Post website. 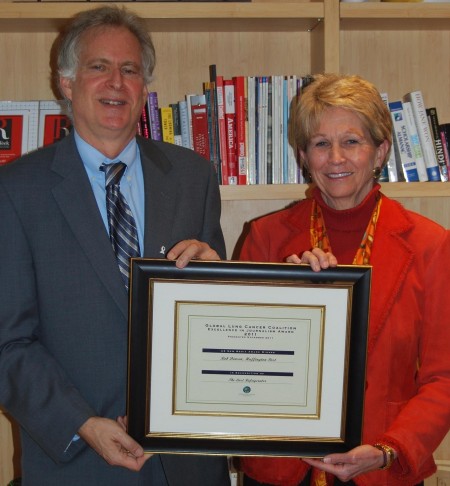 “With confidence and perseverance Elena managed to survive lung cancer”

This disease comes quietly, showing no symptoms. “You’ve got lung cancer” is the equivalent of a death sentence – it is among the almost incurable diseases. You think you will soon be dead, your family count the days they will have with their loved one.

These perceptions might come naturally but they are wrong – your family should believe and support you. This was proved by Elena Ruseva, a woman who managed to survive and overcome the horrible diagnosis.

Her story started in September 2006 when she went to the doctor for her regular check-up. Since she had high blood pressure, her GP sent her to consult a cardiologist. And he noticed some liquid in her heart. Series of tests were made to find the cause. Elena visited various specialists; the results were always good and the cause was still unclear. Finally, she had a chest X-ray. It showed a tumor and some metastases. However, she was feeling well. Then a bronchoscopy was recommended at the Military Medical Academy. However, the results were not sufficient for a final diagnosis. And then the doctors recommended an examination of a piece of lung tissue. On 22 December, just before Christmas, she heard the final diagnosis – lung cancer.

Elena recalled: “I suppose the reaction of my family helped me from the very beginning and I was not too stressed by the diagnosis. They did not act like everybody else. No crying and wailing over me as if I was doomed. I was worried but I was not thinking of death. I approached the disease as something that should be treated. Never said to myself: God, this is the end! I am usually very sensitive and fear things like that. Apparently, you never know how you would react in this situation and what kind of a person you would be.”

Elena had metastases in both lungs so an operation was not possible. Doctors said the only option was chemotherapy. She was quickly admitted at the Oncology hospital in Mladost District in Sofia and started treatment in January 2007. She went though four cycles of chemotherapy with a 25-day rest period between them. After the first session she started losing her hair.

“Hair loss did not give me much stress. I have watched films where women were mostly scared of losing their hair. I did not perceive it as something terrible. The therapy will be over and the hair will grow again, this is what I thought”, says Elena.

Following the four cycles, she went to a post-chemo check-up. It showed the cancer did not progress but then the status was the same as at the beginning. Another four chemo cycles were planned. A stronger medicine was included at this stage. The therapy ended in September but there was no improvement.
Light at the end of the tunnel

While Elena was going through the first cycles of the therapy, a new medicine Tarceva got a registration in Bulgaria. “I was thinking of asking for this medicine after the negative results from the therapy”, said Elena. She got information, though, that the cost was not covered by the National Health Insurance Fund and the medicine was very expensive. She was advised to continue the regular treatment. However, Elena got determined to find a way to get the medicine.

Fortunately, her colleagues decided to collect money and help her buy the medicine although the price was BGN 5000 (~ EUR 2500) for two months. She went to a doctor who agreed she could use it and prescribed it to her. Elena started taking the medicine, one pill a day, in February 2008. She continued buying it with her own means as her employer’s financial condition deteriorated resulting from the crisis. She on the treatment for one year. Her determination was rewarded – she was improving. Some of the tumors were already empty – they were visible at the scan but not active. She had to continue but could not get money to cover the costs from anywhere.

Elena again had good luck. The doctors at the Oncology Hospital were excited that a person with a similar diagnosis can improve so much. The Head of the hospital, Dr. Borislav Dimitrov, promised to do his best to continue the current treatment. Every month he somehow managed to secure another dose of the medicine and this continued for the whole of 2009. In 2010 the National Health Insurance Fund included the medicine in the list of therapies to be covered for patients. Now Elena got it for the fourth time with its cost covered by the state. “Thank God, I feel so well. I can still see the tumors during the medical examination but they are not dangerous anymore. The disease has been blocked”, Elena breathes a sign of relief.

The story of a cured successfully doctor: Faith is all you need

He never had any disease, not even a cold – for so many years. Then suddenly, 8 months ago, he got a vocal cord paralysis. He immediately went through a PET scan in Varna. Although there were no symptoms, the biopsy proved lung cancer.

He started chemotherapy. He went abroad to get tomotherapy. This radiation treatment is used only for lung cancer. “This is a treatment I and my colleagues did not know about. One takes it easier than chemotherapy”, the doctor explains. After the tomotherapy he was considered cured successfully treated. He started the radiotherapy 20 days after the chemo. Those were 30 procedures for 48 days. “I haven’t stopped working. I feel very well”, the doctor adds. “The forthcoming check-up should show whether everything is finally gone.”

“One might not handle it right if they are all alone in this. My wife, my daughter, my friends, everybody I know fully supported me”, he explained. The doctor has already recovered his hair and his weight. “People should not feel despair; belief in cure is all you need. Medicine has reached such a level of sophistication that you can be surprised how many cases there are when doctors give up but things sort out by themselves”, the doctor shares his experience.

“We, doctors, still don’t know the causes of many types of cancer. We do not know for sure what medicine or plant would work. We use what we know, the routine chemotherapy means, but maybe somewhere around there is a plant that can solve it all”, the doctor says in conclusion.