The Excellence in Journalism and Special Recognition Awards 2020

This award recognises his outstanding contribution to raising awareness of the vital importance of early diagnosis. 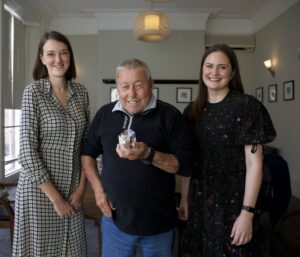 A Life of Service and Dedication

Bill served his country from a young age, first in the Merchant Navy, and then as a member of the Royal Signals Corps. Yet possibly his most significant contribution is the advocacy work he has been doing since he was diagnosed with lung cancer.

He was among a cohort of patients assessed as being at higher risk of developing lung cancer invited to take part in a Lung Health Check pilot scheme funded by Roy Castle Lung Cancer Foundation.

Bill was invited to attend a clinic in the Bulwell district of Nottingham, where he was assessed, and subsequently referred for a low-dose CT scan. This led to a diagnosis of stage 1 lung cancer, and he was offered a range of treatment options. He was eligible for surgery with curative intent, and readily agreed.

“In one sentence, the doctor told me, ‘You’ve got lung cancer’ – and my heart stopped – but then he also said, ‘We’ve caught it early, we can operate, we can fix it’ – and suddenly there’s hope. That was five years ago, and look at me now – fit, healthy and enjoying life!”

Since his diagnosis and subsequent treatment, Bill has shared his story countless times. He has been featured in newspaper, magazine and online news items, and he has been key to promoting awareness and promotion campaigns supporting the development of further targeted lung health checks. Watch him discussing his experiences here.

Jackie Fenemore, Chair of LCNUK, said: ”We wish Bill all the very best and thank him for his time and commitment to help our cause for earlier diagnosis. We wholeheartedly agree with this Award.”

Those sentiments were echoed by Mike McKevitt, Director of Services, BLF.

He said: ”Absolutely right – this is a very well-deserved award. Our congratulations.”

Bill received his award from Dr Emma O’Dowd and Dr Helen Morgan, who are carrying out research work funded by Roy Castle Lung Cancer Foundation, called the DECLINE project. This investigates why some patients who are eligible for treatment with curative intent choose not to proceed with it.

”We know from the National Lung Cancer Audit that up to a third of patients identified with early-stage lung cancer decide not to have treatment that could cure them, but what don’t know is why. Our work aims to better understand those reasons. That’s why Bill’s contribution is so important – his experience can help people as they consider their treatment options.” – Dr Helen Morgan

Dr O’Dowd also explained why Bill’s advocacy was so vital:

“To have someone who put themselves forward for a lung screening programme, who has been through it, and who was diagnosed early, and who had treatment, and is now almost five years out – that’s still a comparatively rare set of circumstances, unfortunately. So it’s great that there is someone who also willing to speak out about their experience.

“It makes a massive difference, and encourages other people, when there’s someone talking about it in their own language, making it simple and understandable. That’s far more likely to encourage someone to come through the scanner than a medic standing up and saying ‘please come through it’. Telling people what happens is just so valuable.” 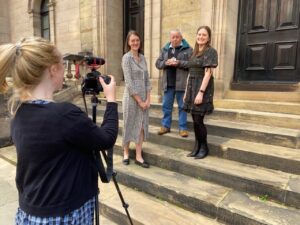 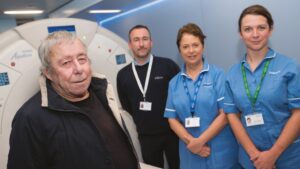 Bill with members of the Lung Health Check team