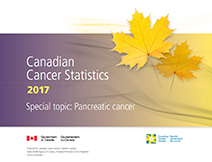 Nearly 1 in 2 Canadians is expected to be diagnosed with cancer in their lifetime, according to a new report – Canadian Cancer Statistics 2017 – released by the Canadian Cancer Society (CCS) in partnership with the Public Health Agency of Canada and Statistics Canada.

Lung cancer continues to be the most commonly diagnosed cancer overall (14% of all cancers diagnosed) and the leading cause of cancer death, causing more cancer deaths among Canadians (21,100) than colorectal, breast and prostate cancer combined (18,500)

Tobacco use causes more than 85% of lung cancer cases

Between 1989 and 2012, it is estimated that 31,660 lung cancer deaths have been avoided as a result of cancer prevention and control efforts.