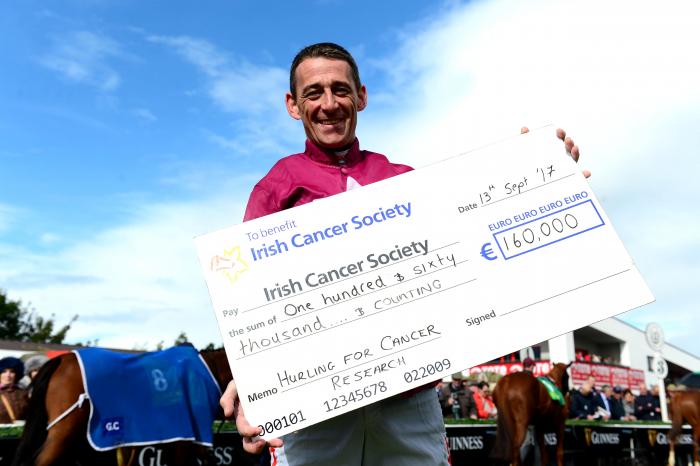 In the six years of the event, which sees past and present sporting stars from GAA, hurling and soccer take to the pitch, €700,000 has been raised to fund researchers working on life-saving cancer research.

Cyril Farrell and Jimmy Barry Murphy acted as referees and RTÉ’s Miriam O’Callaghan was kept busy as a sideline official. Henry Shefflin and Marty Morrissey were also on hand to lend their support.

Victory on the night went to Jim Bolger’s Star’s managed by Liam Griffin and ably assisted by Wexford boss, Davy Fitzgerald. They beat Davy Russell’s Best, managed by Kilkenny’s Brian Cody and Kevin Manning by 7-21 to 8-13.

Hurling for Cancer Research organiser, Jim Bolger said, “We enjoyed a phenomenal game of hurling this year with the largest attendance and the highest scoring game since its inception. However, the biggest victory of all is raising so much money to support the Irish Cancer Society’s cancer research. Cancer is a disease that has unfortunately touched almost every family in Ireland. One way we can fight back against this disease is through cancer research, and by discovering new and better ways to diagnose and treat cancer. It’s heartening to see so many sporting legends take to the pitch and show their support for the work of the Irish Cancer Society.”

Mark Mellett, Head of Fundraising, Irish Cancer Society said, “Each year we are struck by the immense support given by all those involved in Hurling for Cancer Research. To raise €160,000 this year is an enormous achievement which will help the Society continue to invest in lifesaving cancer research. Thanks to voluntary donations raised through events like this, the Society has been able to invest €20 million to cancer research since 2010. This has supported more than 150 cancer researchers to work on a diverse range of individual or collaborative projects that will ultimately lead to better ways of diagnosing and treating cancer. Funds raised through Hurling for Cancer Research 2017 will help us to continue this work and improve the lives of cancer patients in Ireland, and hopefully one day stop cancer.”