As the Federal Government raises taxes on cigarettes, the ACT (Australian Capital Territiory, which contains the nation’s capital, Canberra) continues to lead Australia in their commitment to support programs to help quit smoking for good.

The ACT Government is getting behind healthcare professionals through Lung Foundation Australia’s QUIT4octoberTM initiative to help people achieve the goal of being smoke free for one month, making them at least five times more likely to become a permanent ex-smoker.[i] 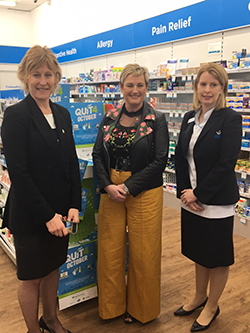 Lung Foundation Australia CEO Heather Allan said price increases, such as those resulting from a tax rise, were a proven and effective strategy to motivate smokers to quit.[ii]

“Every year, about 15,000 Australians die prematurely from diseases caused by smoking. In addition to having significant health impacts, smoking is an expensive habit. If a pack-a-day smoker quits, they are likely to save more than $6,500 per year,” she said.

“There are immediate health benefits to quitting smoking at any age. Stopping smoking decreases the risk of lung and other cancers, heart attack, stroke and chronic disease.”[iii]

For the first time QUIT4october is educating GPs and pharmacists to work together and start the quit conversation with their patients and customers. Lung Foundation Australia is working closely with the Pharmacy Guild Australia to implement the QUIT4october campaign.

“We hope to roll out this approach across the nation, beginning this year with the ACT and mirroring the successful approach in Tasmania which has the second highest rate of smoking in the nation.”

ACT President and community pharmacist, Amanda Galbraith commented that ACT had led the way in helping smokers to quit through pharmacy led intervention.

“Only three to five per cent of “cold turkey” quit attempts – are successful, compared to 25 per cent of those that use health professional support and stop-smoking medication.”

Throughout September, Australians are being called on to encourage friends and family who smoke to seek support from their GP and pharmacist and a month-long campaign starting on Sunday 1 October, 2017.