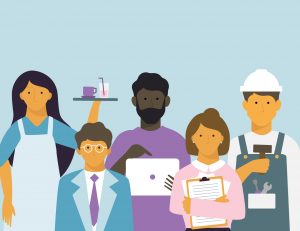 More than a quarter of cancer patients think that their company doctor fails to provide guidance. In their eyes, the doctor lacks specific knowledge about cancer. That while the disease has major consequences for their work. The work situation is adjusted for nine in ten people, six in ten experience financial consequences and one in ten even loses their job.

This is the result of a study by the Dutch Federation of Cancer Patient Organizations (NFK) – of which we are also part – among 3,500 (former) cancer patients and 602 relatives of the impact of cancer on their work. Only 45 percent of patients are supervised by a company or insurance doctor. Most people make a personal plan with that doctor, discuss medical complaints and receive reintegration counseling. Many patients are satisfied with the supervision of the company doctor, but more than a quarter of them say they have missed something in the supervision. They mainly lack knowledge and expertise about cancer, treatment and its consequences. They feel misunderstood and give the supervision of the company doctor a score of 4.6.

“We find these results worrying. Too often occupational physicians fall short in the supervision of cancer patients. Knowledge about cancer and its consequences seems to be lacking, ”says NFK director and director, Arja Broenland. NFK will bring the results of the research to the attention of the Dutch Association for Occupational and Occupational Medicine. She also calls on company doctors and related disciplines to better study the short and long-term effects of cancer.

The research also shows that the disease and the treatment have major consequences for the work situation of patients. Two thirds of the caregivers in the hospital do not discuss those consequences with their patients. According to NFK, there is still a world to be won here. The research shows that when it is discussed, this is of added value for nine out of ten patients. That the impact on the work situation is large is evident from the fact that the work situation has been adjusted in almost 90 percent of patients. For example, five out of ten people report sick (partially), a quarter (temporarily) stop working and a quarter (temporarily) less hours of work. So it is only logical that six out of ten people indicate that they are going back financially.

It is also striking that 6 percent of patients are discharged and that 4 percent do not renew their contract. That means that one in ten people loses his job because of the cancer (treatment). ,, That seems a low percentage, but this is unacceptably high. These people are disadvantaged twice, “says Broenland. ,, It is of course extra annoying if, in addition to your health concerns, you also lose your job and get financial worries as a result of cancer. We therefore make an urgent appeal to the understanding of employers and politicians, and ask them to look for a solution other than dismissal. ”

103 (3%) of the participants in this survey were patients with lung cancer.