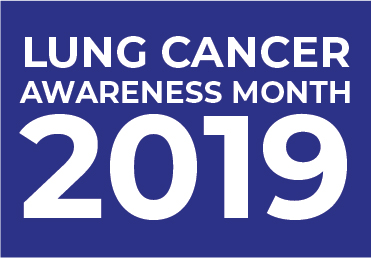 In many countries worldwide, patient advocacy groups take part in awareness campaigns throughout November. The graphic above is shared courtesy of the Go2Foundation (USA).

IASLC (the International Association for the Study of Lung Cancer) and other leading organisations concerned with lung cancer advocacy help to promote this annual initiative.

Within the GLCC, many of our member groups promote their own campaigns throughout November.

We start with the Australian Lung Foundation’s campaign:

Alongside the short film, Lung Foundation Australia (LFA) has also issued the first National Report Card, calling for the funding of 100 lung cancer nurses by 2030. There are currently just 12 supporting 12,817 Aussies diagnosed with Australia’s biggest cancer killer each year.

SYDNEY, 31 OCTOBER 2019: Today, on the eve of Lung Cancer Awareness Month in November 2019, Lung Foundation Australia (LFA) has launched a first-of-its-kind short film to showcase the experience of those living with lung cancer. As well as capturing the heartbreaking reality of a lung cancer diagnosis, LFA is sending an important message to the nation’s decision-makers: Act now to end the disparity that surrounds the country’s leading cause of cancer death and give 17,603 Australians currently living with lung cancer a fair fight. [2]

For the first time, LFA have collaborated with Australia’s best video producer, Playtime, to creatively and impactfully plant the viewer in the shoes of Australians diagnosed with lung cancer. The simple premise of the film is to bring to life, in ways not before attempted through video, the sense of time standing still – the all-encompassing feeling of life moving in slow motion – which is the shocking reality too many face when diagnosed with lung cancer as they are often diagnosed and treated too late.

The film focuses on real-world insights from patients who are living with lung cancer and their experience with the preciousness of time, and is voiced by Ms Lillian Leigh, who herself currently lives with lung cancer.
“The film puts the viewer firmly in the shoes of patients – to offer a glimpse of how life unfolds as and after a diagnosis is received. It is an all-too real reminder for me,” said Ms Leigh.

“Lung cancer can impact anyone, at any time, including families like mine – emphasising the importance of greater awareness and action, particularly in the area of research, and the need to better support a community which is simply asking for more time. I have long-campaigned on this issue, and thank the Lung Foundation Australia for bringing this important cause to life this Awareness Month through the launch of the Walk In My Shoes short film.”

Added to the absence of lung cancer specialist nurses nationwide to ensure personalised care, around 20% of those diagnosed with lung cancer never receive any form of treatment.1 Furthermore, less than half diagnosed are assessed by multidisciplinary teams (MDT), despite proof of better quality care and survival outcomes.1 And despite advances in treatment, almost one third (28%) of patients are never staged, and therefore, may never start on the most appropriate treatments for their disease. [1]

“We want equity of services. By 2030, we are asking the Government to commit to funding 100 full time equivalent dedicated lung cancer specialist nurses, up from the dismally low 12 as it currently stands, to better reflect disease burden, and to bring lung cancer in line with cancers such as breast and prostate cancer, both of which benefit from approximately 400 and 50 specialist nurses respectively”. [3]

Despite being the leading cause of cancer death, the five-year survival rate of lung cancer is just 17% -compared to 91% and 95% respectively, for prostate and breast cancers.3 Despite the more thanthree-fold greater mortality rate of lung cancer (9,034), compared to breast (3,090) and prostate(3,306), only 12 lung cancer specialist nurses are currently in operation in Australia. [3]

To coincide with the launch of the ‘Walk in My Shoes’ short film, LFA is also today releasing the findings of its inaugural Lung Cancer 2020 National Report Card that is focused on improving how lung cancer compares to other cancer types across mortality, five-year survivorship, diagnosis, investment in specialist nurses and research.

By 2030, in addition to calls for 100 lung cancer nurses, LFA is setting several ambitious goals:

Whilst the Government has started to act on lung cancer, it is clear for Professor Christine Jenkins, Chair, LFA that we still have a long way to go.

“We would like to thank and congratulate the Hon Greg Hunt MP, Minister for Health, for his recent commitment to setting the wheels in motion when it comes to the establishment of a National Screening Program for lung cancer. It is a vital first step, and we look forward to working closely with him, Cancer Australia, and our partners, to make this important initiative a reality,” said Professor Jenkins.

“To make genuine inroads, however, the lung cancer patient community needs assurances that they are the priority now and, in the future, that the Government and political decision-makers will continue to invest fairly in medical research, lung cancer treatments, and essential services and care. We stand ready to support the Government on this important policy and public health work.”

The ‘Walk In My Shoes’ film will premier in November in Parliament House, Canberra during Lung Cancer Awareness Month to a room full of MPs and policy-makers.
“We wanted to kick-start this Lung Cancer Awareness month with something a bit different. For so long we have campaigned for awareness, but now we need action”, states Mark Brooke. “I am hopeful that our Government will do the right thing and ensure Australians living with lung cancer receive a fair go.”

For further information on this campaign visit shinealight.lungfoundation.com.au.