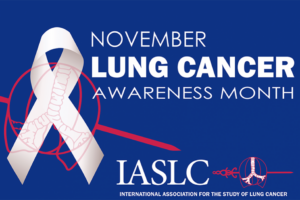 LCAM, which is observed annually in November, highlights the need for more research to be conducted while cultivating a better understanding of the disease.

Lung cancer is the leading cause of cancer deaths in men and women worldwide.

The disease remains difficult to identify and many individuals don’t experience any symptoms until it has reached an advanced stage.

The GLCC recognises the overwhelming body of evidence showing that screening for lung cancer using low-dosage CT scans is an effective way of improving rates of early diagnosis (when the most effective range of treatment options are usually open) and outcomes for those affected. We offer a range of advocacy support tools for those seeking to effect change in healthcare policy to secure national screening programmes in their region. You can access those resources here.

This Lung Cancer Awareness Month, we seek to educate and inform those around us regarding the facts pertaining to lung cancer, including its causes, signs, symptoms, routes to diagnosis. We also seek to promote better understanding of how and why false conceptions and narratives, and therefore prejudice, can often surround lung cancer.

You can get involved by liking and sharing our social media posts – and by making us aware of your own local initiatives and campaigns.

We wish all our member organisations every success in their efforts to promote greater awareness of lung cancer and its signs and symptoms. Above all, we stand alongside everyone affected by lung cancer and those striving every day to improve their experience and outcomes.

Throughout the month, we will update this page with messaging and initiatives from our various member organisations, to reflect their LCAM activities. This is by no means an exhaustive list. Please visit the sites or social media channels of our member organisations to see what they offer.

Pulmonale, our member organisation in Portugal, is running a multi-media campaign called #AgirAntesdeSentir, which, in English, means: ACT Before (you) Feel. It highlights the fact that often symptoms of lung cancer are subtle or do not become noticeable until the disease has progressed, so it’s wise to act promptly. Pulmonale is campaigning for the introduction of a lung cancer screening pilot programme in Portugal, with the ultimate aim to improve early detection – and outcomes.

The campaign centres on a powerful and informative video, which features doctors, a psychologist and a patient discussing features of lung cancer, its symptoms and how best to detect it.  Here it is:

Pulmonale have also organised a major public event to tie in with the campaign, a public session to be held in the city of Oporto, on 19th November. 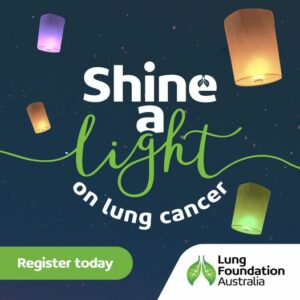 ‘Shine a Light on Lung Cancer’ campaign from our colleagues at Lung Foundation Australia.

Here’s how they highlight their campaign:

In Lung Cancer Awareness Month, we are shining a light on the impact that lung cancer continues to have on the lives of Australians.

Did you know that in the next 10 years, almost 168,000 people will be diagnosed with lung cancer? We need to continue to support this community with life-changing research to be able to increase survival rates.

Our annual Shine a Light for lung cancer walks are happening across the country this weekend to help raise funds to improve lives and ultimately find a cure for lung cancer.

It’s not too late to sign up and shine a light on lung cancer. Visit the link to find a location near you and register https://lungfoundation.funraisin.com.au/shinealightonlung… 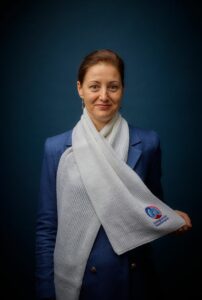 Anyone with lungs can get lung cancer

Throughout this month, the Longkanker Netherlands patient organisation is asking for extra attention to this disease, from which 10,000 people die every year. Thus, it is the deadliest type of cancer.

“Lung cancer is often discovered late, when it is so important to be there early. That’s why we want to alert people to the symptoms of lung cancer. Because anyone with lungs can get lung cancer. Screening and early detection of the disease are therefore essential,” says Lidia Barberio, director of Long Cancer Netherlands.

Every year, nearly 14,000 people are told that they have lung cancer. Often the disease is already in an advanced stage, because some symptoms only arise at that point. Lung cancer is the form of cancer that kills most people in the Netherlands: 10.000 per year.

“Almost everyone knows by now that lung cancer is common in people who have smoked a lot for a long time and who did not stop very long ago. Much less known, but it is very important to know, is that lung cancer certainly doesn’t only affect people addicted to tobacco. Anyone with lungs can get lung cancer,” says Lidia Barberio. She is the director of Lungkanker Netherlands, the patient organisation for everyone dealing with lung cancer: patient, loved ones and relatives.

Being alert about symptoms and signs is very important. The advice of Lungkanker Netherlands is therefore to make an appointment with a GP if someone has a cough for more than nine weeks, coughs up blood, remains short of breath, is constantly tired and/or unexpectedly loses a lot of weight.

“Don’t postpone it, because lung cancer can never be detected early enough. The sooner you get there, the greater the chance of a longer quality good life,” according to Lidia Barberio. 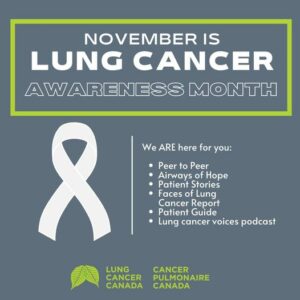 A time to confront Canada’s most prolific cancer killer and the impact this disease has had on Canadians. We will continue to support patients, families, healthcare professionals and innovative research in the fight against lung cancer.

In addition to our events and activities we invite the community to tag us in your own initiatives, so that we can share and support them during November. 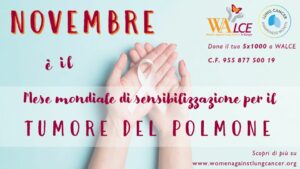 Lung cancer awareness month.
This is an important opportunity to raise public awareness and focus attention on a pathology about which the need to disseminate proper information, in terms of prevention, diagnosis and therapy is crucial.
#LCAM #HOPELIVES
Return